Many Views and Cramped Shoes 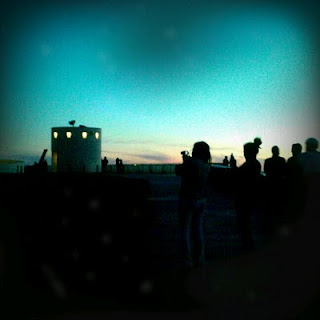 It's good to be here. My eyes are windworn from being atop Griffith Park and my driving foot is cramped from breaking and gassing down nearly the entire stretch of Wilshire. Because if you are not in traffic you are not here. Or maybe you are inside one of the numerous gourmet burger joints or blow-out only salons.

Check this page for ongoing updates (often in the form of cell phone hisptimatic/android/ap pictures):   theskl.tumblr.com 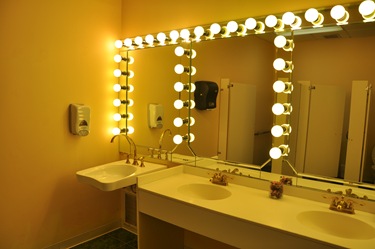 Headed out and up in the sky for a visit to LA-la land! I will tell everyone there about freshwater pearls and fields of white gold: 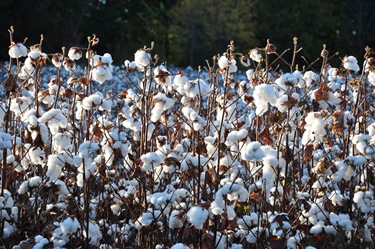 And hopefully I will be checking in to tell of palm trees and expensive sneakers and pinkberry. 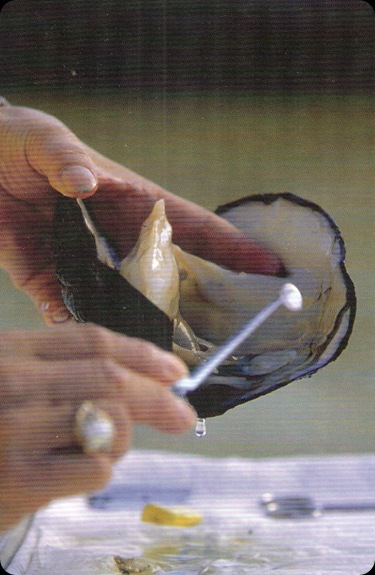 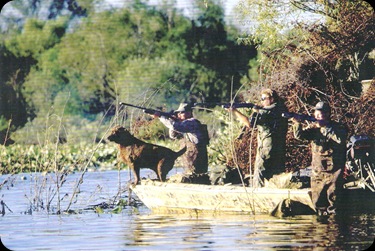 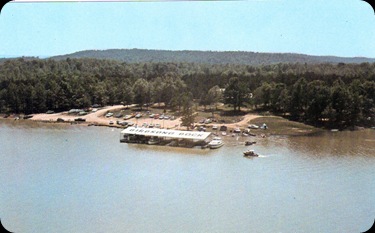 The free tour of the Freshwater Pearl Museum included a short video of a CBS Evening News program circa 1987 that featured entirely too many close-ups of freshwater pearls being extracted from snotty mussel innards. It was nauseating. I don’t even like to accidently see people eat shrimp on a Red Lobster commercial.

We didn’t get to go on a tour of the pearl farm. The woman working the museum (and gift shop) gave us the rundown on the tours, the next one was in six days and she asked if we were interested in signing up. Well no m’am we weren’t planning on sleeping in the Freshwater Pearl Museum 1986 video viewing room for the next week, but thank you. You can’t fault her for being enthusiastic. Like any good tourist attraction, the tours had special names - one of them was called a “tweener” – meaning if you couldn’t afford the real deal you could be humiliated in front of your friends and family by being forced to say “we’ll just take the tweener tour.”

I think she was happy to have us in the shop because it validated her belief in the mysterious beauty and magical draw of the pearl farm and Tennessee River. “I came here on vacation and stayed here!” She said she wasn’t the only one – same thing happened to three other people in the area including the guy who runs the marina. I was beginning to think this is where people went on the lamb. Our gal at the jewelry counter looked like she was on her fifth life at thirty two.

Before we left she told us we looked like Katie Perry and that every woman wanted a Tahitian (pearl). I’ve been trying to figure out the hidden messages ever since. I’m sure they are buried somewhere in the slimy mussel meat underwater in the pearl farms of the Tennessee River. 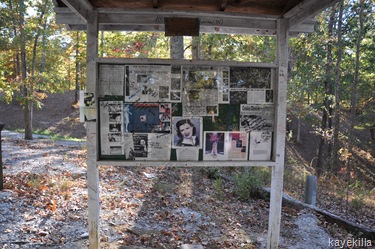 Our of touch and on the road. Back with tales of Tennessee trails quite soon.

It is Not Necessary…

Have I Told You This Story Before?

I’ve been having a mild to moderately hard time getting things blogged out because I’ve been writing so many letters lately. I see that in my students as well. Since they spend so much time away from them, they write elaborate letters to their friends and families (and maybe even to their enemies – those letters/vows of revenge can take a lot out of a person) so by the time they have to write in class they are spent. I guess they feel like they have already done all the telling that needs to be told. Not everyone is a performer or a standup comedienne or preacher or amnesiac or some other kind of person who takes pleasure in re-telling and re-telling and re-telling.

So we must learn to compartmentalize and save certain stories for certain audiences. For example, I thought it would be a great idea to save a mention of the Subway Sandwich Artist, that loves to put just one black olive on the center of my sandwich when I say “extra olives,” just for this blog. It’s visual – just imagine a lone chopped black olive on a bed of shredded Subway lettuce - quirky, right? What if I told you the Sandwich Artist does not speak english very well? Now we are talking about how sandwiches and humor transcend language. What if you knew that the owner of this Subway was a mean ol tyrant who re-uses paper cups and times his Sandwich Assembly line? Now it’s a story about transgression and the mini-revolts of a disempowered wage worker.

I can’t put that in a letter now.

The fields of Arkansas, hereby deemed Smokansas, are still burning. Outdoors has turned to indoors as the entire sky, corner to corner, looks like the inside of a breakroom in a tobacco factory. I keep the windows up but by the end of my 45 minute drive, my throat feels like I’ve been sitting on the wrong side of a campfire for about that long – and it’s not fabulous to lose your voice when you still have to lecture for a couple hours. By that time, the only cure for the scratch attack in my throat is whiskey or fritos - so I’ve been stopping off at the Exxon an exit or so before the compound to get something, anything for relief.

I prefer the Exxon because the Shell is too close to the exit and has a depressing layout and the guys that work there are always on their laptops or cell phones (completely destroys my image of gas station workers). The ladies that work at the Exxon have style (glitter nails and funky angel and jesus pins on their uniforms) and always something to say to me when I buy “Mad Housewife” merlot like, “I saw this in a magazine… makes a great gift,” and there was that time I heard one call the other “Big Booty Judy.”

Perhaps the greatest feature of the Exxon is that it has a very clean bathroom featuring one of those Xxxxcelerator high-powered hand dryers. You know the kind that nearly blow off the epidermal layer of your skin – very extreme hygiene.

So, anyway, yesterday I nearly toppled over a small skinny, skinny man with a long, long pony-tail and teeny, wiry mustache. He was just standing around like a creepy little troll with a bunch of larger ogre dudes waiting for the guys restroom. I started to say “Exscuuuu-uuse you…” when I noticed that his ankles were hand – or I guess in this case it would be - ankle-cuffed together. I looked out the window and saw the white US Extradition van, and the armed officer (sporting a gold hoop earring which made me think; private company) by the door, and I thought, I really hope there aren’t chickconvicts in the ladies room, I’m in no mood for a lipstick riot, but I decided to take a chance knowing Big Booty Judy would have my back.

The second I opened the door a woman screamed. (Yes, this is a recurring but very true theme – screaming in restrooms) I thought she was reacting to the mob of barely supervised prisoners just a few feet away, but apparently she was just startled because she’d put her hands under the Xxcelerator Dryer and was completely unprepared for not only the unmistakable powerful burst of air, but for an air dryer all together. She looked at me and said, “God dang! I expected paper towels to come out of here.”

I laughed. Travel amateur. So I told her, “I’m sure one of the guys out there will let you dry your hands on their pants.”

The Most Creative and Fun Blog Post on Earth

B got me a new yellow wallet. My money is much happier.

The retractable antennae is stuck on my car but the motor for it still goes for about 45 seconds after I turn my car off. It sounds awful, like the bones of a small - but tough - animal (like a hamster or squirrel) being crushed in the gears of a meat grinder. At least that is what I see on the faces of people walking by.

We went this place the other night on a suburban recon mission: 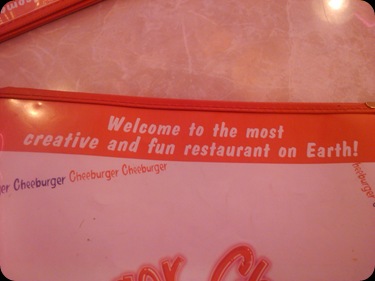 But it was not the most creative and fun restaurant on earth. There is already a place in Chicago where you can go and the wait staff is mean to you (but for fun, right, because that is fun – the most fun on earth) and draws on your tablecloth. That is creative. At this place they sat us at a crummy table, slapped down some greasy menus, and left us for fifteen minutes. Maybe our waitress could tell that I, myself was creative and would just take it from there.

It was not been my intention but my collection of  photographs of dead birds on sidewalks is growing. I usually just use my phone camera to capture the peaceful post-mortem of these poor sweet reckless creatures. I imagine that they thought just beyond the window was just another funky fly-able space – maybe even another galaxy – it is an easy mistake, sometimes I can’t even be bothered with trying to open the door to my office and I just bash my face into the glass with excitement. That might explain why there have been more than a few outside of my office building, though the most recent birdacide was outside of the gap. In this case, I blame the store’s attractive fall stripe collection and sale posters.

Who will take pictures of us on the sidewalk? 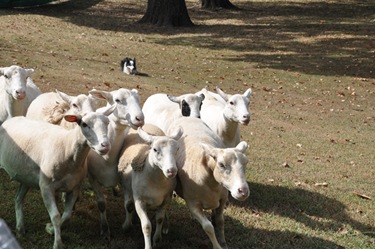 (taken at the Clanfamry the other weekend)