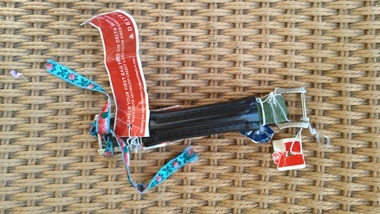 When we picked up my bag at the Phoenix Sky Harbor Airport the main handle was hanging on by an elastic thread. It came all the way off the second I touched it. I’m always a little sad when I have to retire a piece of luggage, especially when it has been with me through some good trips, and especially when we have been lost and reunited three times - thousands of miles from home. The handle from this ol feller had one strip of country-fair style ribbon, a leather luggage tag (lost), and no less than a dozen different little elastic loops where I had attached a handwritten tag on according to which airline I was flying.

You know those paper tags always get torn off (but the elastic stays behind with a little bit of paper that you never bother to remove) so I imagine that my phone number and name are flying around random parts of The Great 48 like accidental calling cards for another neurotic traveler.

If I have to wait too long in the baggage drop line I start to think that if US Airways sees my Delta tag they will not properly process it so I grab one of those US Airways paper tags out of their inviting tag bucket and fill it out while the people behind me get extreme line anxiety at the site of someone using a paper and pen (My god! What IS that device? An inkpen? This could take HOURS!!).

Because I worked in a small parts factory where we glued credit cards to credit card offers I have the habit of wondering about the 6am-2pm shift of workers that might have put my daily junk together, I always wonder who loops the elastic through those tiny loops.  Do they wear special gloves to prevent chaffing from the elastic? Do they hit each other with the elastic bands? Do they have to punch their own holes? Is there the one guy that drinks in the bathroom on break? Is everyone afraid of the manager? Do they sit around and ask, “Who the hell fills these dumb tags out out any more?” 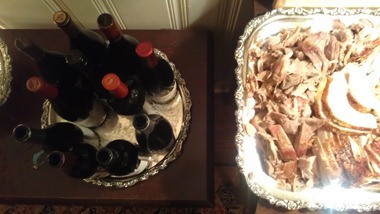 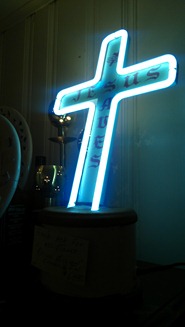 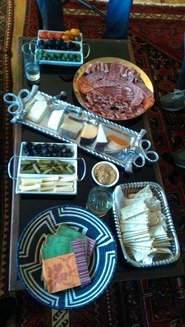 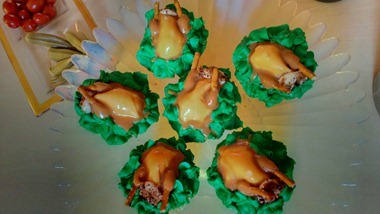 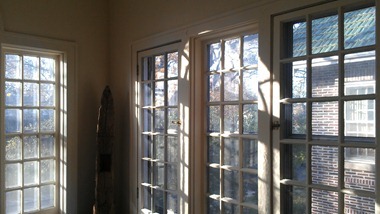 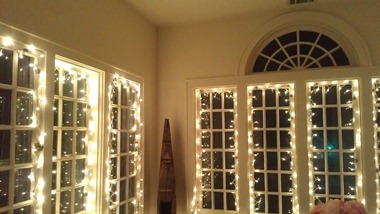 (Aside from the ol ‘friends and fam) I’m thankful for:

Years spent working in service and retail so I know to be extra thankful for not having to work on or near the holidays, high definition television, Christmas lights, having a place to go on Thanksgiving, nail polish, books, pictures, movies, sparkling water & sparkling wine, sparkling personalities, postage stamps, pencils, my car - aka: Great White, roads, rest stops and information centers, wide open vistas, un-crowded movie theaters, workout DVDs, digital cameras, pizza, apples, the zoo, and my health. 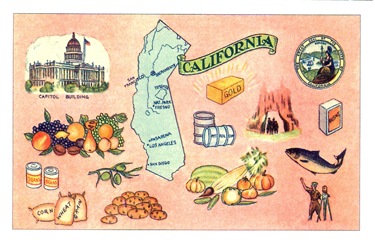 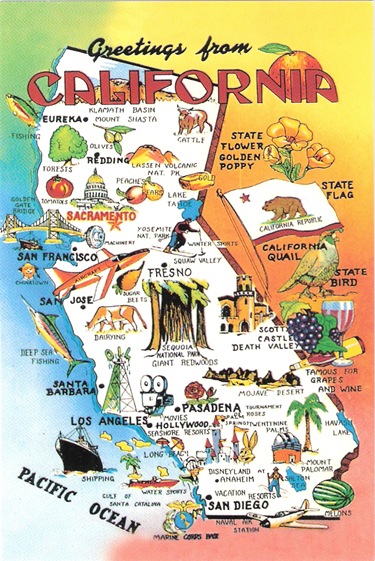 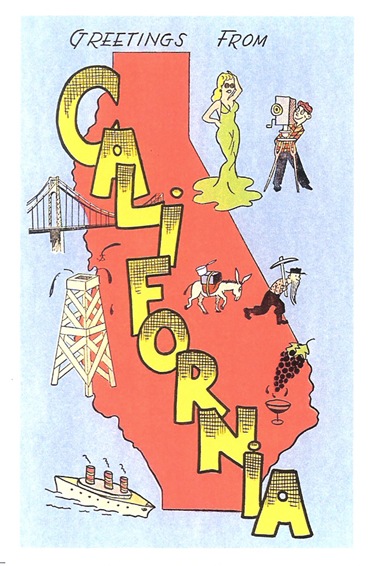 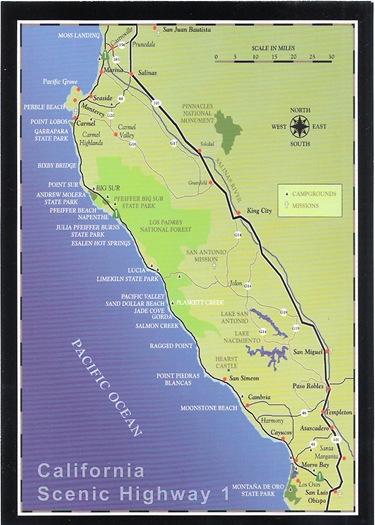 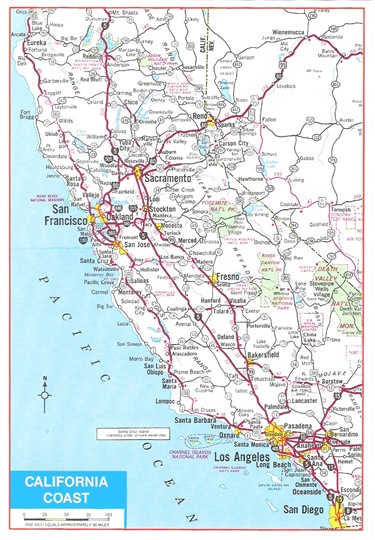 I am pretty sure these aren’t repeats, I was just in California a year ago but they take their postcard map output very seriously. Just look at how serious the last two examples are. They aren’t even trying to make it cute. They are just like: Here is a postcard map of the place you are vacationing, the map is indeed functional up to AAA specs so if you need to send a plea to be rescued from a small highway in Death Valley, the recipient of this postcard will only need a decent vehicle, water, and this postcard.

That is what the last card said to me anyway.

The Road is The Same: A Stand Still Story 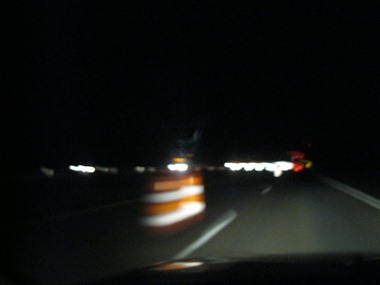 The I-40 that stretches east-west across mid America (it is actually at some points a similar route to old Route 66) belongs to big business-hauling rigs, wide-load 18-wheelers, and big, tweaked-out truckers, especially, it seems in the section running from Memphis to Little Rock.  That part in particular features shrunken lanes with crumbling edges, cracked overpass bridges, and not a single light. So with the recent time change, by the time I get out of class it is as dark as a Yucatan highway.

I know I’m just a little speck of tin on four wheels and a guest of these truckers when I drive my weekly route to Forrest City, but I am an ungrateful guest, especially after last night.

Everything was rolling along smoothly until I came to a stand still in the middle of nowhere, stuck in between giant semi-trucks, and lost cell reception. I’m used to it dropping here and there since Arkansas is spotty in certain country areas so I tried to just wait it out. After fifteen minutes I realized we were on a overpass and I could feel the road underneath swaying and shaking with the idling rigs and the cars passing under. Because I had no other entertainment I made up stories about the bridges collapsing and me getting out of my car in time to jump on top of a truck cab to ride it safely past all of the other vehicles smashing into the concrete after a 100 foot fall. I had another scenario where the bridge cracked right beneath my vehicle and the semi in front and behind me smashed me into the road and/or alligator pit below.

When thinking about my death was no longer entertaining I turned to self pity; I couldn’t help but think how unjust it is to get caught in a nighttime traffic jam after coming home from a twelve hour work day. We started moving forty minutes later before I could start texting people these thoughts. We were down to one lane, sure, but we were moving. I drove for another oh I don’t know? Thirty minutes before I noticed something on a highway sign that said: Little Rock 35 Miles

I had totally and completely been driving, not just driving but suffering, in the opposite direction of home.

Little Rock is a two hour drive from Memphis and it was almost 9:30pm and I hadn’t had but a touch of gross falafel from Kwik Check at lunch.  The highway exits off the 40 in daylight aren’t places where you want to hang out at, let alone after 9pm when everything around, except the XXX shops and the truck wash places, is shutting down southern style and you’re in a mentally imbalanced hypoglycemic road raged state.  I knew I had to toughen up and just get some gas, get some chemically-based fast food, and get on the road. I decided that I would pee my pants  instead of stopping at any trucker-shower Valero to risk an attack in the women’s bathroom.

On my way back I was able to see the people heading west stuck in the traffic jam I had been in. Watching it from the other side I was pissed that the traffic flow seemed to be going much smoother than when I was stuck in it. I don’t know why I had to suffer and the worst thing that happened to those drivers was they had to break their cruise control.

But it is a metaphor, see? When you turn around and pass back over your memories of pain and despair it looks different, it looks like something you can handle. Something you did handle.  And you are happy to continue even on the dark, semi-truck-clogged narrow road ahead, because you are just happy to be moving.

My lands! I haven't had decent cell or internet for days. The central coast is connected to nature and livestock and wine and not cell phone towers. I wouldn't have been able to call anyone anyway since I had laryngitis and y'all would have just hung up on me when all you could hear is raspy breathing.

But I'm back in Los Angeles with my voice and a bunch of photos of Hearst Castle (here's one below - I'll post more when I have my computer). The best part about taking that tour was hearing all the old ladies gasp and "oh my" when the tour guide said either how old something was or how much it cost.

The castle was full of old dusty gothy stuff that I didn't care much for (except the theater) but the swimming pools were the bees knees!  I don't know why some place in Vegas hasn't recreated the Roman Pool. Many mysteries of life remain I suppose. 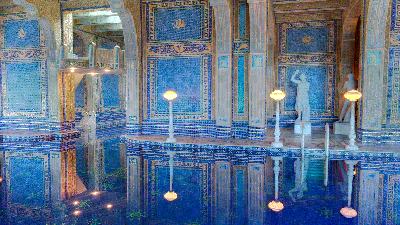 Sunset over my Voice

Update: Made it to Los Angeles. I'm on the mend but in the voiceless phase of recovery. The dust storm has made its move into my voicebox. It is maddening to be involuntarily softspoken and I vow to never take a vow of silence.

Good thing my voice can be heard here.

It is good to be at the edge of America. 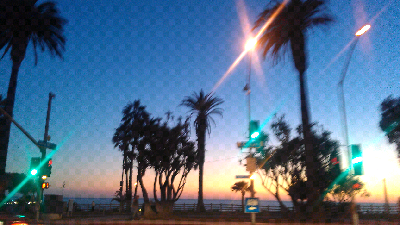 Dust Storm in My Head

I strongly dislike the android blogger app because it smushes my great photos into lowpixeloblivion, but I have a few minutes to update and no proper computer around.

The take away lesson from this post will be: never underestimate an Arizonian Dust Storm. We got into Phoenix early Friday and putzed around for a bit before heading out to Tucson even though we heard some panicked parental warnings about a deadly dust storm heading our way.

It wasn't that bad to drive through - in fact we were treated to a beautiful sight of a lone wild horse doing its mustanging thing and kicking up dust in the dusty middle of nowhere -  and that was after seeing a newcaster and newcasty truck broadcasting from an especially dusty highway exit which is a beautiful sight in its own special ridiculous way. Because we made it without anything happening to the car I figured everything was good.  That was until my throat and face started to freeze up with poisonous dust mucous within a couple hours. It kind of had a sandman effect too, because my whole respiratory system had been injected with sleep dust! Let me tell you that business did not go well with my wedding attendee outfit.

It is almost two days later and I'm just now recovering but I'm really rethinking dust-mask fashion. Why wouldn't I have thrown one on as soon as I got to the desert? I mean knowing how dangerous this place is?  If only the cacti knew how much I loved them, this wouldn't happen.

I wonder how the newslady is doing. 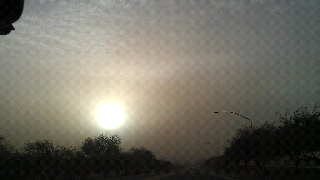 Busting Out of Here 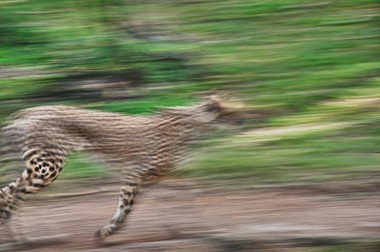 Just for a little while. I am headed west for a week and some change. I’ll probably be posting pics on my tumblr so check it!