We were at my folks house doing what people do in the country, lookin’ out windows and talking about the weather, when B started to make a fuss about the birds in the backyard.

So I said, “Whatever, you cityslicker!”

(This amount of birds is not actually normal and I was totally stoked to see them.)

Spotted in Michigan this week: 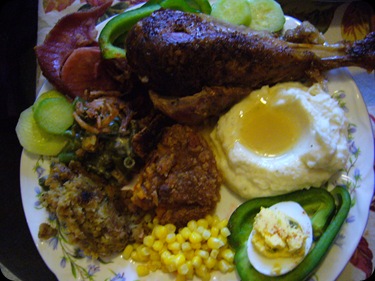 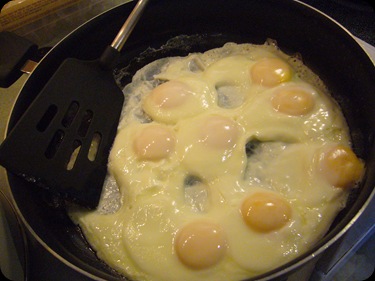 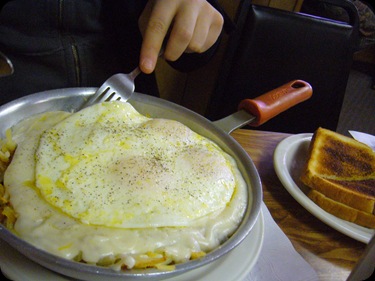 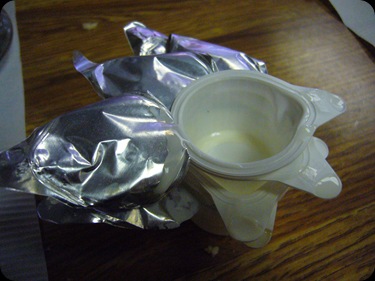 I wasn’t the only one headed north last week, I passed a couple trucks full of turkeys driving to their death:

As part of my family visit I suggested that we attend the Silver Bells in the City Festival in Lansing, the capitol of the great state of Michigan.  We really had a good time exercising our imaginations (since we couldn’t see much):

120,000 people. Most of them trying to light a cigarette or hoist their children up on their shoulders in front of my face. There is nothing that bonds a family together like parade warfare.

I received this message in Arkansas: 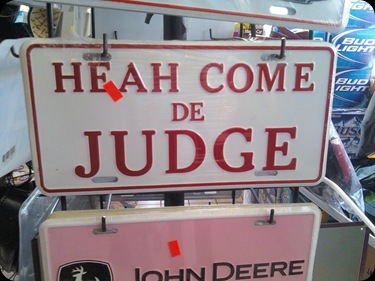 And I was blocked in by Palin in Noblesville: 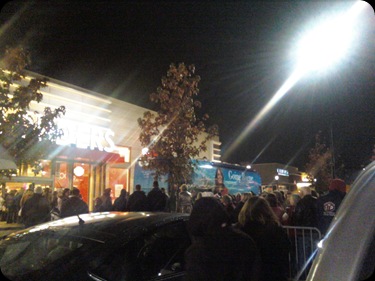 They sold cupcakes in the name of Rogue: 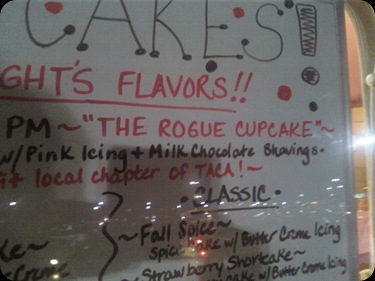 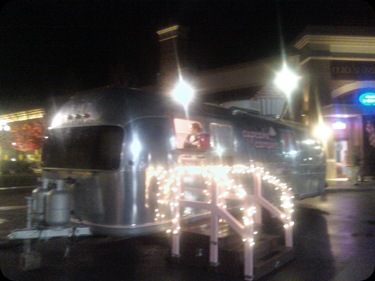 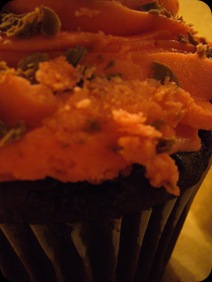 Nothing special happened after I ate it. I just felt like getting back on the (rogue?) road and wondered, when did Indianapolis get all this traffic? 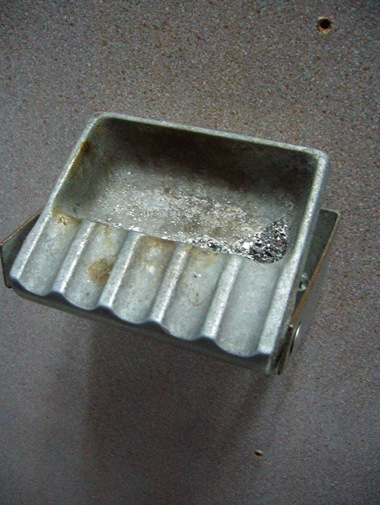 My Kind of Gatherings 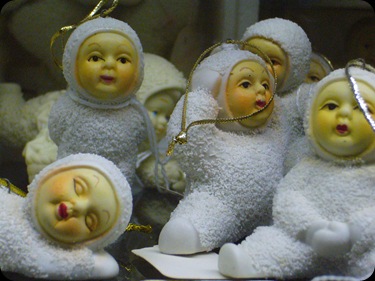 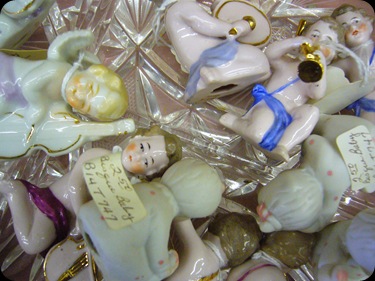 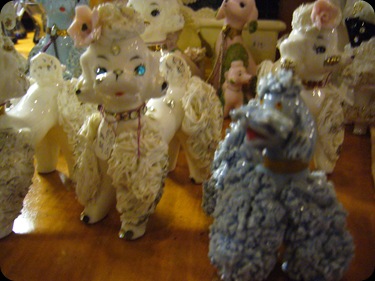 Crafting out the Flu Demons 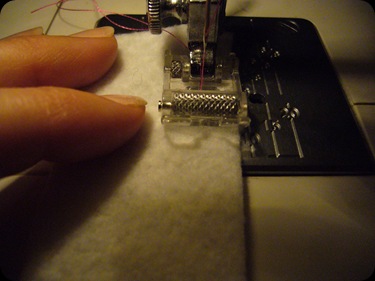 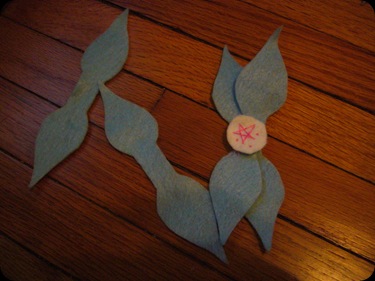 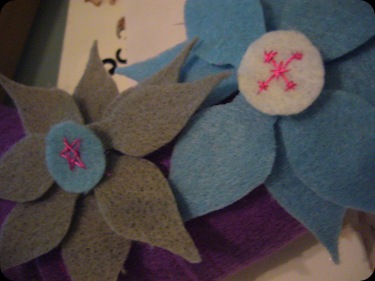 I'm making a wreath – I hope when i am finished that I will have kicked this headcold. Unlike my illness, I am making it all up as I go along. These color choices are influenced by blue Nyquil and I hereby declare that alterna-colored poinsettias look a lot like Hawaiian print somethings so the theme this year will be Christmas in Hawaii.

I am also going to finish this little needlepoint kit I picked up at a Little Rock thrift store: 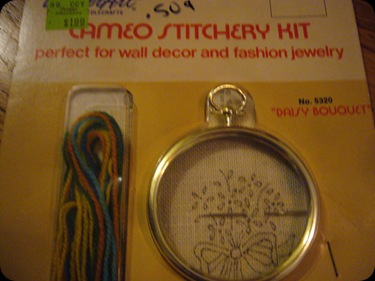 The cashier said, “Taking on a big project, huh? Sure you can handle it?”

“Well sir, I need the extra free time to sew your big mouth shut.” And then I promptly opened the kit, took out the needle and yarn and sewed his mouth shut with two daisies and chain stitch. He spent the rest of the day ringing customers up without comment.

Get Lost (if you can)

My story starts with a freckled-faced eight year old and ends in a domestic dispute.

See, freckles weren’t the only thing on little Sally’s face (named changed to protect the selfish parent that sent a sick child to school  - the day I was called in to substitute - in lieu of staying home with them), her nose was dripping with vibrant green boogers that seemed to change consistency throughout the day. One minute it would look like a slim scene from Nickelodeon TV and the next, a fifties B-movie Swamp thing type coagulation. “May I go blow my nose?” she would ask and I’d say “Oh child! please do! With haste!” And I would run and dunk my head, hands, and elbows in a bucket of Purell.

But it didn’t help, and I know I can’t entirely blame Sally Snot Face, but I can blame the entire second grade because I contracted some kind of disease in the germ incubator they call elementary school. I’ve been suffering all week, the week where I happened to get a few job interviews.

My wits were not about me during the last interview, an hour long phone panel complete with awkward pauses and verbal missteps. I failed to answer questions like, “Tell me about a time you have used written communication to convey an important message.” Mucinex made me think this was a trick question, I wanted clarification on what would be considered an “Important Message” and I could only think of scenes from the new John Cusack movie, messages about an impending violent apocalyptic situation, or just messages about  donuts now available in the break room? I was not of right mind.

After the exhausting phone interview, B came home with a broken cell phone and bad attitude and I just wasn’t having it so I left in an abrupt dramatic fashion (in a way I thought would best punctuate a domestic dispute) and started to drive around to look for a place to get lost (and blow my nose). During this journey I became painfully aware of the limitations of my new home town. There is no place to hide, unless you want to be hidden forever if you know what I am saying. I caught a movie about Coco before she was Chanel at the Ridgeway but that was over by 9:30 and nothing else was playing after that. I drove up and down Poplar and examined my options for burning up some time – gas stations, Krystal Burger, and Kinko’s  - not a whole lot of options since even the Chili’s bar starts to wind down around ten.

I debated looking through my car to find something to photocopy and bind at Kinko’s, but thought against it. I would have probably contracted more germs. So instead I went home, longing for the days of Los Angeles where you can shop for decent lip gloss past ten pm, where you can be invisible everyplace, and drink alone without interruption or judgment within a block of your overpriced apartment. Or the days of small towning in the Michigan country where a contemplative corn field or gravel pit is only a half-can-of-beer’s drive away. I will someday find comfort in a city that forces me to go home, but not until this snot goes away. 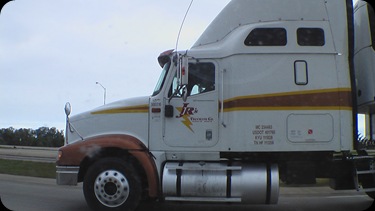 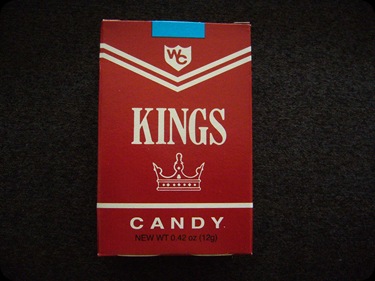 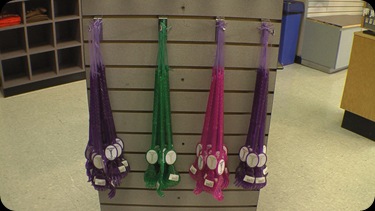 If you must know the rest of the story: I’ve been getting up insanely early, painting my own nails, suffering from the embarrassment of ordering decaf Americanos, falling behind in a word count race, prepping for interviews, researching my next big thing, replacing the word project with the word thing, ignoring the World Series, meeting the cute, the kind, and the troubled private school youth of Memphis, and of course, saving up all my good words to blow your mind -- after I get through tomorrow.

Objects In Picture Are Way Cooler Than They Appear 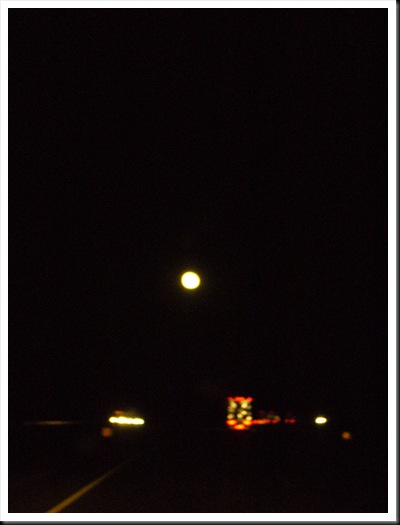 Drove to and fro Little Rock and Memphis today for some thrifting and a HOSB session. It was perfect weather for driving and listening to Inherent Vice and the Lewis Family. I’ve been trying to break my very dangerous taking pictures/video while driving habit but did anyone else see the moon tonight? Giant. Orange. Unable to be captured with a consumer grade digital camera from the early 2000s – that is it right there in the picture – the bright shining ball over the eighteen-wheeler taillights.

It’s blurry because of those pesky rumble strips that you hit when you are driving off the road.