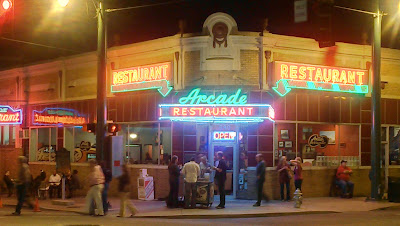 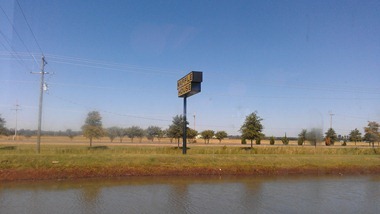 I posted the Waffle House picture from yesterday using a Blogger app for the ipad and it looked awful. I don’t know why an app would smash and pixelate a perfectly good photo, but I guess they say there is an app for everything.

On the drive into work I saw a triple-cherry-picker situation. I mean I have never seen one before: 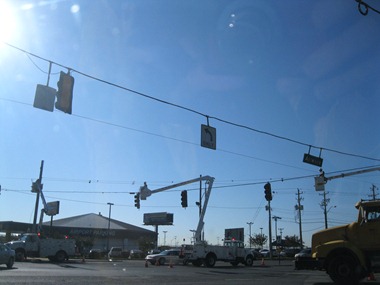 And you probably can’t see it too well either. As much as I try and try, no matter how much risk to my life, my shooting and driving skills still have room for improvement.

Maybe this will help: 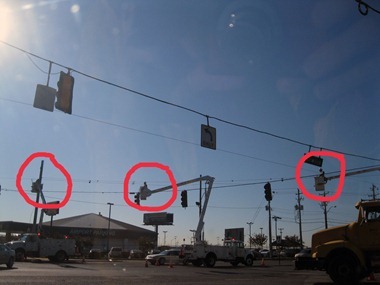 Good Day For A Delta Drive (and a waffle) 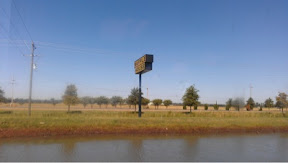 Today there was an ambulance and a cop car in the Waffle House parking lot off Highway 61 in Tunica. I imagine a waffle-butter-induced heart attack. Not necessarily a bad way to go.

I also read that the fella that invented Doritos recently passed away and will have the glorious orange-powdered snack chips sprinkled on his grave.

We will be judged not by the foods we eat in life, but by those we take with us.

Don’t Mess With My Henson 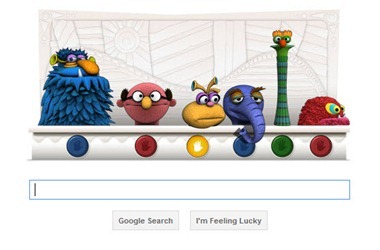 Did y’all notice the Google search page this weekend? It was to celebrate Jim Henson’s birthday. He would have been 75. That is not so old - it is a shame because he really could have had a least another decade of puppet-making.

In true form, I can‘t help but relate everything I encounter online or in my daily routine, to my travels in Mississippi. Mississippi applies to everything, everyone, and every situation and maybe that is the direction this blog will take in the future.

Seeing all of the Henson stuff reminded me of B and I stopping at the Jim Henson Delta Boyhood Exhibit in his hometown of Leland, Mississippi.  You can imagine how much traffic they get (not much), so when we showed up on hot, late summer day the woman working the information counter/sign-in book/tour guide stand was stoked to see us. So stoked she told us about her son and his girlfriend who might make a good wife but she wasn’t sure but they are so in love and he is in the army and they see each other on Tuesdays and Fridays and and and oh my lands! It was so distracting that we didn’t notice another older woman lurking near the original Kermit replica. So when the museum woman finally got around to showing us the actual museum, we were startled when the older gal started heckling her.

“Now this is the original puppet that Mr. Henson…..”

“THAT’S not the original O-R-I-G-I-N-A-L, I have a picture of one from the Smithsonian…”

“Well technically there are several….”

And so on and so on – you got the feeling that this was either a mother and daughter situation or an old Leland rivalry between the two gals up for the one Jim Henson Museum job because the woman trying to show us around was clearly trying to ignore the heckler and since there was only four people in the room it was quite, uh – uncomfortable.

I think if Jim would have been there he would have made a couple puppet characters based on the ladies. Kind of like a cross between Janice, Miss Piggy, and those movie critic dudes – called Museum Rivals. It was that bizzaro.

Visual of the Week: The Baggie Connection

Subway is the only food service establishment in my entire office park and everyone from the polo shirt and khaki pants set is there from 11:30 am – 1:30 pm. I like it because when you drive down the winding shrub-lined office-park-y road there is a parade of doughy men dressed in three-button shirts and florescent-light weary women wearing ill-fitting business casual, walking like four years olds in their mother’s high heels, all carrying those clear subway bags full of torpedo-shaped loaves swinging back and forth near their sides. It reminds me so much of seeing people walking in Central Park or Runyon Canyon running with their dogs holding flailing bags of dog doo in their hands.  I call it The March of the Footlongs because the women always get the footlong so they can “save the other half for later”. 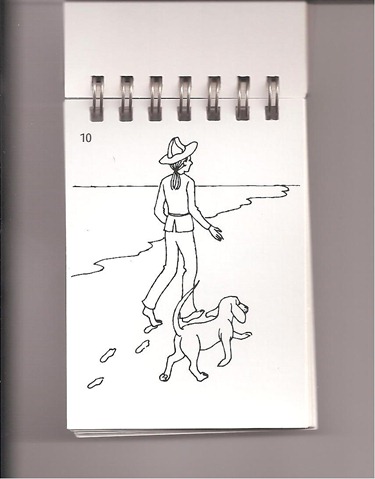 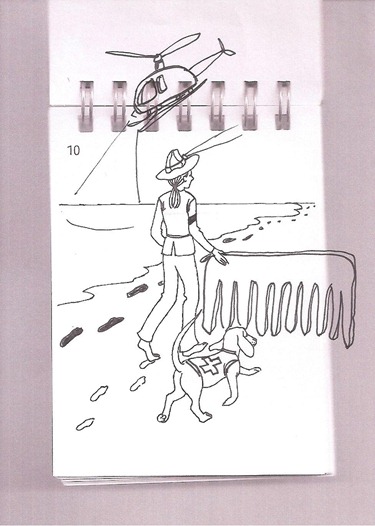 From my regular pre-class joint: 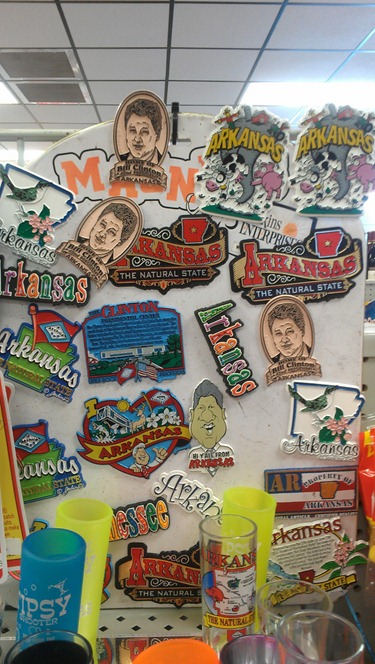 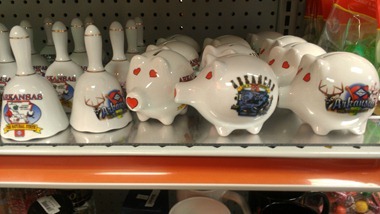 The Arkansas sky is always falling: 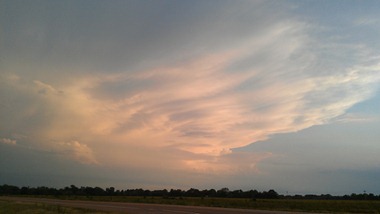 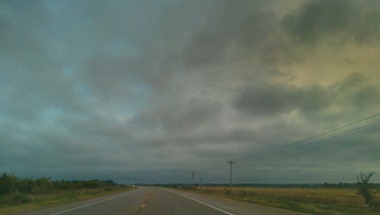 Dear Everyone in Line For Whatever

Dear Mary — Please make sure all the errands are done before you go on vacation, as I do not want to be bothered with insignificant things. Thank you. J.D. Salinger 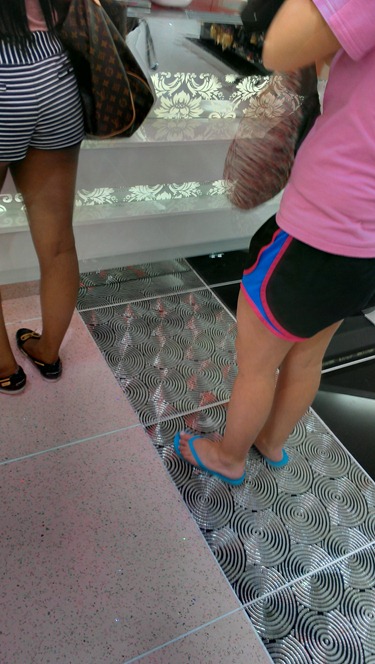 Compare the two interpretations of the “casual short” above. One is clearly superior, I’ll let you decide which one.

A couple things: 1) Not since the Umbro craze of the early nineties has an athletic short infected the public domain as much as these disgusting bright-color-on-the-side-swoop things. 2) When you wear athletic clothing in public to do anything other than athletic things you are saying to the world “world – you are my dirty wrestling mat” and you are asking for a fight. 3) Unless you live in Hawaii,  just got a pedicure, or are drying off from an intense Mississippi River surfing session, you should refrain from wearing flip-flops or someone could think that you just escaped from a hospital, ESPECIALLY if you are standing in line at a cheap mall clothing store huffing and puffing through your beaky bird nose letting everyone around you know that you have been waiting forever!!!!! Especially if you have the nerve to complain to the manager that you have been waiting forever and can’t they open another register because you only have one item. And people will know for sure that you are completely crazy when you do finally get up to the register and you pay for your one item with a check. A check. 4) If you are under 70 years old and are paying with a check, then maybe you should keep wearing those shitty shorts so we can all keep assuming what is true – you are a thoughtless twerp.

And those, Mr. JD Salinger, are the type of people you would have been bothered with had you ever stepped outside.

Another completion picture from my teeny book of mind tests.

Here is the original number nine: 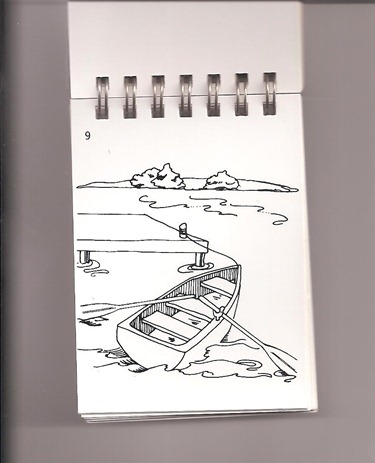 The funny thing was that this time I had to do two drawings to clear out the first thing that came to my mind which was: 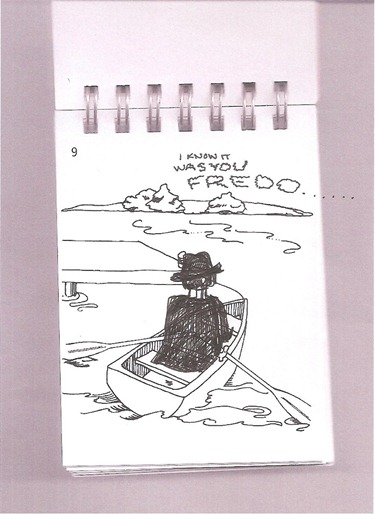 I feel like a movie reference does not really offer any true psychological insight so I pushed myself to come up with an original interpretation: 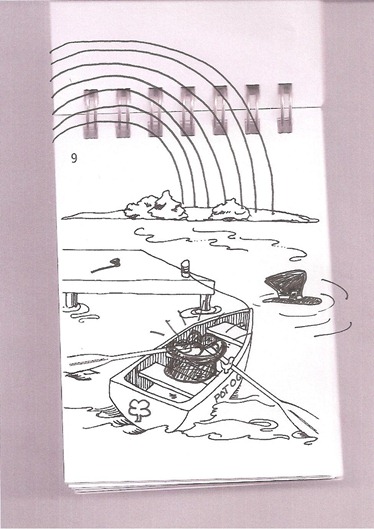 And here you can see that I envisioned a tragic leprechaun dock accident. Will the gold fall in the wrong hands? Will the rainbow disappear? Nothing lasts forever.

I thought about posting something about the tenth anniversary of 9-11 but I figured all of the networks and radio stations and stuff covered it. You don’t need to know what I was doing that morning (tae-bo-ing). You might need to know that I remember thinking how ridiculous it was that against the backdrop of a video loop showing planes crashing into the World Trade Center, all of the newscasters kept repeating as if answering to a CIA mind control directive, “Just like we all remember where we were when Kennedy was shot. We will remember this day forever.” Thank you for the news. What a non-thing to say. Anyway, I caught a few moments of Diane Sawyer forcing the children of 9-11 to talk about their dead parents and I had enough.

Even in all of our boundless memorializing, there was still an underdog. How American is that?  Poor Flight 93, your tragic fate ended in  a lonely field in Pennsylvania so you could never stack up to skyscrapers in New York City. NYC got the big guy, you got the Vice President.

So that’s it. Ten years and a couple Toby Keith anthems later. The newscasters weren’t wrong, I just don’t need any help in remembering.

If You See Me

Three years ago around this time I left Los Angeles. Whenever I complain about Memphis I have to answer to “Well if LA was so GREAT why did you leave!!?”  I never have an answer for that and I always mean to keep my complaints to myself but that never works out because complaining to yourself leads to depression. SO I slipped again the other night, heard the typical annoyed response but this time I answered, “Because I like to move.”

The night before I moved, my little sister flew out to LA to help me pack up. I had spent the month before selling most of my stuff on Craigslist and was planning only on taking a few things in the move, but I still had a bunch of stuff I had to deal with. So I had a garage sale (at J & B’s house thankyouverymuch) and later my sister helped me pack up what was left to go to the goodwill. We ran out of time and ended up leaving a stack of crap, calling a St Vincet DuPaul truck or something, and leaving the keys behind to set off on a cross-country road trip.

Sure I knew I had made the right choice to sell all of my stuff and not put furniture in storage like some people suggested, but the road trip was haunted by the memory of things I did not mean to leave in the give-away pile. Like, I did not mean to leave behind my vintage crewel tropical sea kit that I spent the lonely Christmas of ‘06 making. But this is now either in a landfill, hanging on someone’s wall, or collecting dust in a Angelview Thrift: 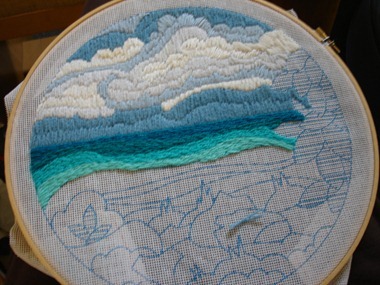 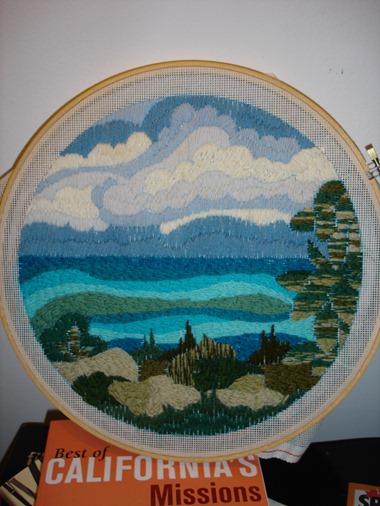 Other things I left behind (and thought about at various points as we retraced route 66) included: Vintage quilt, allergen-proof pillowcase covers, a sack of pens stolen from hotels and restaurants and people, a vacuum cleaner, books, industrial shelves, pots, pans, buckets of paint, handmade sawhorses, and several small framed dried flower thingies.

Time for more dazzling insights into my mind. 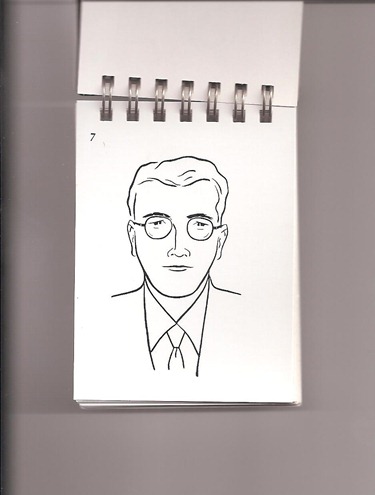 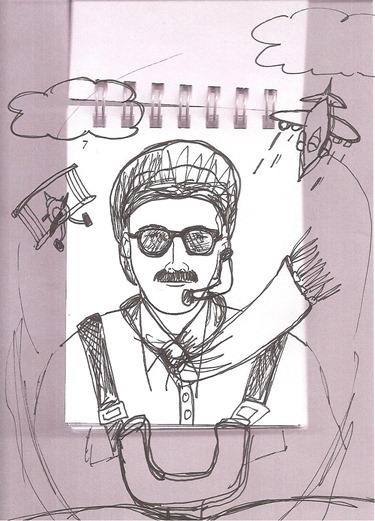 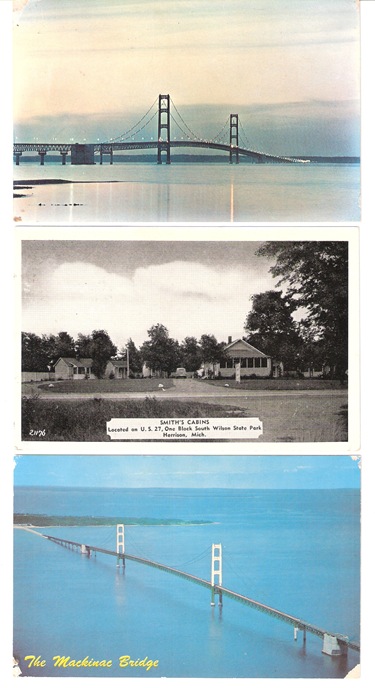 My sister-in-law gave me these postcards when I was in Michigan over the Fourth of July. I could not remember where I put them but I just found them (I’m spending most of Labor Day Weekend laboring around with some long-neglected house chores) in an unpacked bag. Yep, sometimes I don’t unpack bags for months. AMERICA!

The Great Lakes and The Manckinac Bridge in particular are some of my favorite favorite postcard topics so I am so stoked she gave these to me and since I thought I lost them it is like the gift has been given all over again.

Here are the backs: 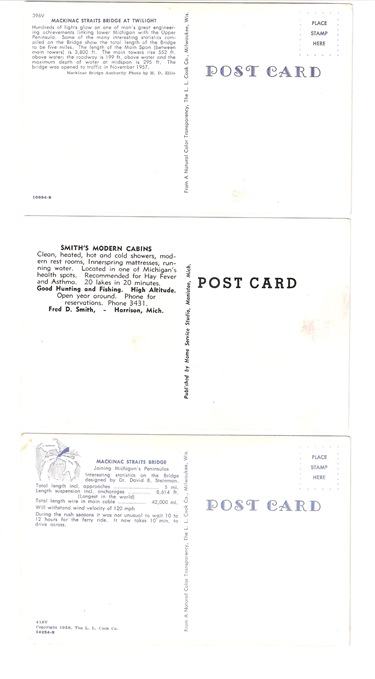