I just sent my better half a phone pic of a mini mustard bottle. It is the international (maybe even intergalatical) symbol of room service. He hasn’t messaged me back and I can only assume that he is jealous.

TNT keeps going out on my TV but I can still hear the desperation of the Cavs. I got some pop and apples at a grocer called Harris Teeter and my checker-outer guy had a limey accent. It was ok with me but the frazzled momish lady holding three gallons of ice cream was so confused that when he told her he was waiting on a price check that she said, “I’m sorry, you are confusing me.”

I blame movies or fairy tales or new country or old punch lines or Casey Kasem – who knows really - but whatever it is – It seems like we expect a lot from these namable/giftable moments, but rarely is it a moment that makes things happen. A decision maybe, an eight hour car ride maybe, but not one thing.

More to the point, it seems we try to commemorate events like graduation and moving and births and weddings and suicides with gifts “so you will remember the day forever.”

For example: the untimely gift of a flower in a glass vase (full of water) given to me by my mother when I was loading my car this morning. 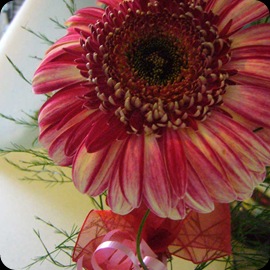 She told me it was so I would have something to hold flowers in my new home. A sweet and unpractical gesture since I wasn’t even able to pack a tootsie roll piggy bank and a certain bottle of shampoo because it was too breakable – this move is a 700-mile move light. So I had to leave the flower and the water and the vase and drive away with the horrible guilt that you can only get from being home and getting odd gifts from your family.

Believe me, save your gifts – or make them edible - I will never forget these moments.

“You can never run away, never. The only way out is in.” - Lola in The Brief Wondrous Life of Oscar Wao (audiobook I just finished on my ride) 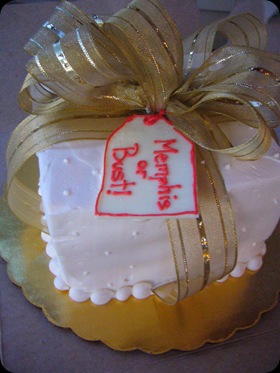 Up Against an Old Giant 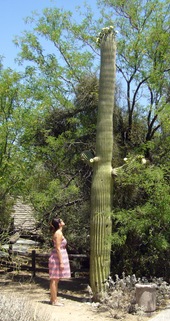 I’m moving again and I feel less like packing than last time and last time ended with me calling a St. Vincent De Paul truck to pick up everything that wouldn’t fit in my sedan just so K and I could make our reservation at Mandalay Bay. 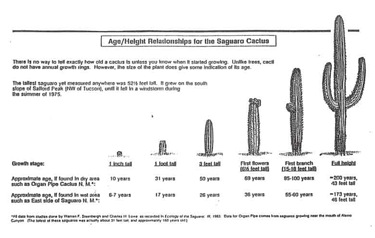 The Saguaro Cactus don’t even get their wings – I mean arms - until they have been around for 200 years. 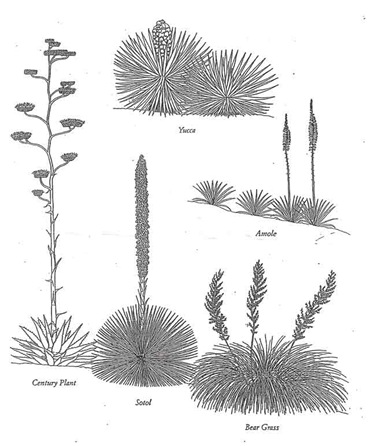 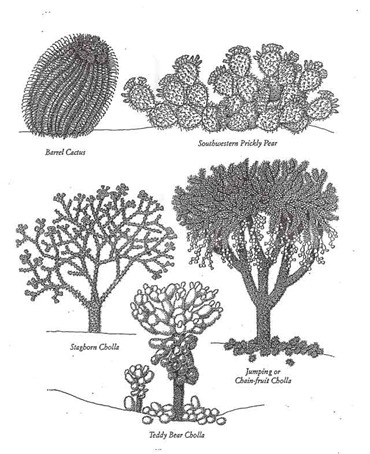 To the Vistas Video Vimeo Channel for more great, brief, and confusing Vistas Videos like this one:

I added several more. I am always looking for submissions and people with steady hands.

New in the Vistas Video Channel: 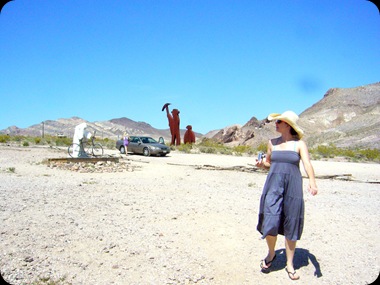 Jamie is clueless as Bethany runs to save Kelly from certain demolition. A ghost mounts a bicycle. It is sunny. 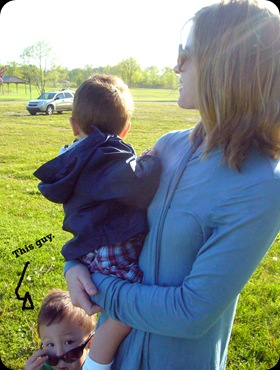 To battle jetlag you must not take time so seriously.

You also can try some hangover remedies (because jetlag can make you feel like you beer bonged your way home) specifically the kinds that include raw eggs and V8 juice.

But what really works is to stay up until midnight local time and no matter what –go to sleep at midnight local time - and I am trying - at all costs. Even if it means one more Michelob Ultra Lime Cactus flavored drink and one more episode of Unwrapped. (I’m obviously a tastemaker and gourmet)

Til then. Hang tuff. 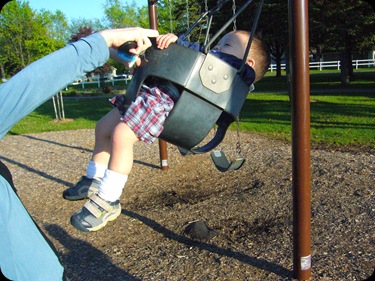 Out of Town Again

Headed west! Check Tumblr for pic updates – see you back on May 18th! 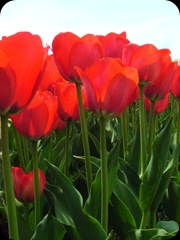 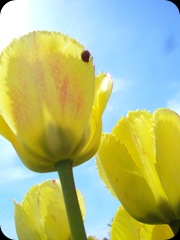 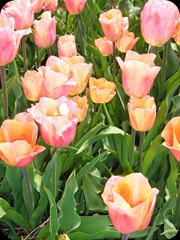 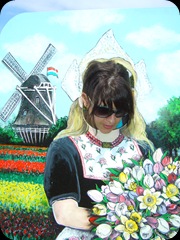 Another day with the sis in West Mich. Tuliptime, Bison, Wooden Shoes, Swingsets on Lake Michigan, and millions of dead bugs and gallons of their guts on my windshield.

We ran into him outside first, the ageless Gerald R. Ford Museum security guard, K was holding an umbrella and he said to her, “you think that is really necessary?” And she stepped out of the rain puddle near the astronaut statue and into the sunlight. She didn’t ask if the umbrella was legal because she knew that he was a security guard, not a cop. He dealt only with order while cops deal with the law.

He’d already lingered too long, he was the cable guy, the mall cop in the movies, the boring cousin, the ex-con on day release.

We lost him during the first part of our tour and saved The White House in Miniature until the end of our museum visit, knowing that the sight of miniature things would make us pass out (as it does for most women) and we were working on a new Vistas Video when he came out of a dark corner, his voice again directed at K, “you have a pan-o-ram-ick camera?”

“Nope, we are very busy doing something extremely awesome with a regular camera.”

“You want to see the room where the Monica Lewinsky thing happened?” He points to a bottom corner office in the elaborate mini white house. Gross.

And then he hands us a brochure, “This is the last one from the back rooms. It’s from the 70s.”

This is the front and the back and an excerpt from a creepy color drawing inside that was placed between the LBJ and Nixon entries: 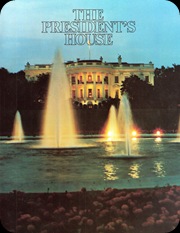 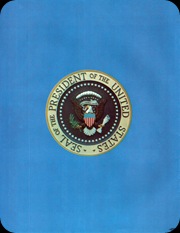 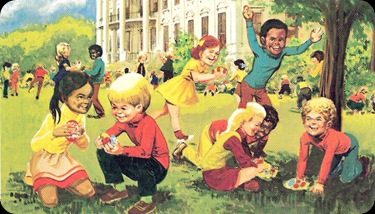 He watched us circle the house, this security guy, the miniature-ness was not making me feel like passing out because every time I tried to point something out to  K, like a hockey game live on a mini tv set, he, the security guy would comment on it. Every time I tried to take a picture of her and he’d say “Ha! That is a cool shot. You want to use your flash? You can you know, I will let you. You normally can’t.”

K tells me she saw him try to offer a small child some unpackaged skittles from his pocket and the kid refused and left the room.

He finally asks us if we want our picture taken together. We agreed and stood in front of the miniature White House, looking like giant glamazons about to smash the nation’s capital. And he snaps one, looks at it and says, “Ooooh. It’s a little dark. I’m going to have to turn the flash on. It’s cool though. I can authorize it.” And zing, the flash goes off and he hands the camera back to us.

A sound comes from his shoulder and he leans into his security guard radio contraption and says, “No, it’s cool. I authorized it.” He looks at us, “they caught your flash,” and we are like ok, who gives a F and he says, “don’t worry, I told them I ok-ed it.”

Now if this thirty year old exhibit wastes away from the decay-inducing light of harsh electronic flash bulbs, it should be known that it is this young security guard, suffering from boredom-induced borderline personality disorder, handing out authorizations to anybody. With people like him guarding our nation’s precious artifacts, who needs a Library of Congress or rules, or laws, or order?

Happy May Day to all you Labor people and pagans.

I’m looking forward to many things this month like seeing my LA friends, and Martha, and the desert, and Arizona, and moving to Memphis and finishing up my job and sweating in the south, but I can’t wait for all the days with the lil drawings: 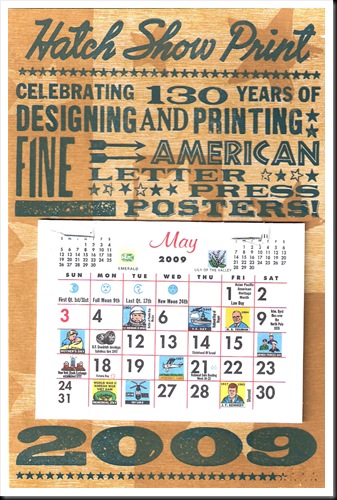