Just Cough it Up Already

We are 38% funded with about 10 days to go. Surprising that we aren't we aren't 138% funded, since this video is fantastic:


I saw The Impossible at the theater the other day. I have a fear of getting eaten by seabeasts so I really had no interest in seeing it when I first saw the trailer, but the award hype (and lack of movies coming through town) changed my mind.

All of my senior citizen Monday matinee homies were there (I like to go out to eat and see movies at the same time as the older folks. Look, they have lived a long time, they KNOW how to avoid the rowdy crowds) along with a few norms. It was hard for me to find my favorite seat, but I chose one in front of a younger-older couple. I thought they were art-film aficionados because the woman was wearing a smart shawl.

The first part of the film shows a brutal tsunami scene where a giant tidal wave demolishes an island, sweeps up adults and babies, and impales them on trees and car parts. Kind of like the relentless first twenty minutes of Saving Private Ryan, most people are watching it through their hands covering their faces, flinching, gasping and maybe letting out a "whoa." It doesn't let up for a while. It is pretty incredible. The whole audience I was with was like "whoa" - however the woman behind me, took it much, much further.  She started to hyperventilate. And I mean like deep, heavy, breathing. A couple times I could feel it on my neck. I didn't think too much of it other than "come on, we GOT it lady, you get upset seeing children drowning, we all do," but then she just would not stop with the breathing! Like nothing I had ever heard. I couldn't understand why she wouldn't just take it outside. I was about to turn around and tell her gentleman friend to take her out, when I thought that maybe she was there with her shrink and doing some kind of immersive water phobia therapy which in that case, would be really rude to do in a theater full of regular (or senior rate) paying people, but I also didn't want to disrupt the therapy. OR I thought, "wait, don't say anything - she might be asthmatic or undergoing lung cancer treatment." All of this concern and I shouldn't have worried because she was probably just having an allergic reaction to the shawl she was wearing. Whatever the case, I was obviously distracted so I just moved.

By this time in the film Thailand is decimated; a puddle with a palm tree sticking out of it. Cars, building, roads - all gone. We have seen the characters swimming around, bleeding, half-naked and crying. I sit down closer to the screen infront of another younger-old couple and realize they are talking to each other (UGH). Ewan McGregor is on the screen wearing no shoes and ripped clothes standing under a beam of a has-been building and I hear the guy behind me tell his wife, in a very matter-of-fact tone, "That's why you should always have cash on you when you go to Thailand." Which makes me nearly burst out laughing - because I am thinking, "oh yes, yes. Cash would have been the answer. Had they had CASH they could have folded up the bills to make a boat?" The couple behind me continues to talk about "how sad" the tsunami was and knowing that I can't handle even another sentence of ridiculousness, I moved to another seat nowhere near anyone in the very front of the theater.

When you are given the gift of observation, also known as being obsessively interested in other peoples business, it is really difficult to enjoy things in public when other people have such distracting behavior! It can be a real problem in the movie theater and at well, Perkins (where I am always overhearing post-AA meeting discussions, religious interventions and lessons, and personal injury lawyers meeting their potential clients). This is also why I have never felt comfortable in a yoga class, because I always get put next to the heavy breathing orgasmic moaner. I try to tell my friends about this and they say things like, "oh I never notice, I am usually deep in my practice." And the instructors usually tell me to concentrate on myself and that only makes me feel like I am six years old. I cannot focus on myself when the dude next to me is using my body as a stretching prop. I just can't do it and maybe some of you yoga class people might want to think about how this practice encourages not personal insight, but extreme self-involvement. No one should ever be so lost in their practice that they don't notice they have rolled onto another person while practicing hot dragon breathing.

I was able to finish watching the rest of the movie and you know, it was pretty good. I don't know if Naomi Watts should get an oscar for playing sick for ninety minutes (we have all done that to some degree), but all-in-all it was surprisingly good for that kind of emotionally manipulative finding-the-family film. I recommend it if you can wear a headset or rent out a theater.
sprung by S K at 1/28/2013 No comments:

Photo of the Week 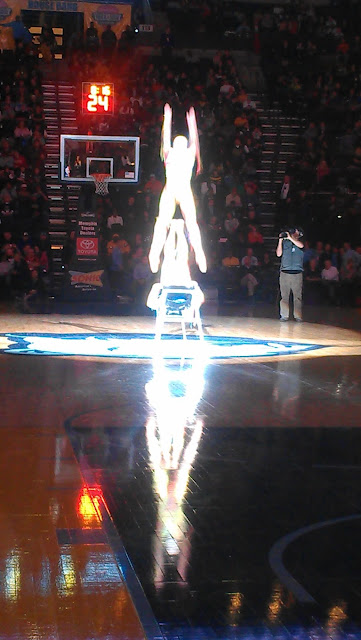 Those are real people. They are wearing nude-body suits with ribbon embellishments so they aren't real people like us, but they are human.

We had floor seats for the Grizzlies/Lakers game and I have been trying to compose a good humblebrag post about it, but decided that this photo expresses the experience the best.
sprung by S K at 1/25/2013 No comments:

Ride a Giraffe With Me

It is good blog practice to only post every 21 days. It mimics the Paleolithic communication cycle.

I have been busy though - check out our latest trailer:

The spooky future: A PC in a Mac!

Thanks to the magic of computing I found a way to run the incomparable Windows Live Writer on my new Mac. Isn’t that thrilling? I may be able to keep this thing up for just a little while longer.

So I’m way behind on any kind of update. Know this: It snowed here in Memphis the day after Christmas and it was very exciting.

It is now 2013 and, you know, the number thirteen is lucky and unlucky so you need to ask yourself, “what will it be for me?” I can tell you I lived in an old, old building in the cass corridor and tons of unlucky stuff happened in that apartment: plagues of both cockroaches and mice, theft, burnt cookies, violent break-ins, voo-doo – you name it. I moved out after six months. I realized later that technically that apartment would have been apartment 13, but the owners chose to skip that number when it came to “naming” apartments, so every floor had three apartments and on my floor there were apartments 11,12, and 14. Isn’t that just something? I don’t believe in curses or bad luck, but sometimes they believe in me.

Now, enjoy this spooky picture of lights on a snowy house: 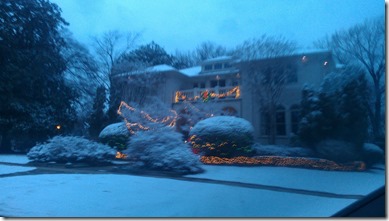 And appreciate the awesomeness of a Memphis NYE: 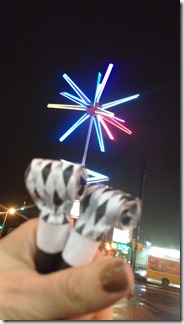 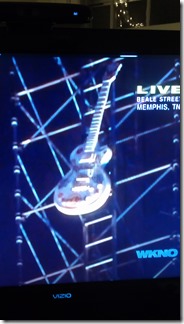 Happy New Year to all.