No Laundrymat for Young Women.

Yesterday I went to the early evening show of "No Country For Old Men." I sat next to a few other solo theater goers. After it was over one of em, a chick that chewed her popcron with relative refinement, leans over and says "sheeewee - I'm going to have trouble sleeping tonight."

"Oh, I was prepared," I say. "I read the book." What the sam hell that means I don't know but thank goodness that most of what I say to strangers and store help never gets recorded unless I use it as an anecdote.

I spent the rest of the night running errands in a dreamy terrified state. The guy at Trader Joe's asked me how I was doing and I was like "what do you need to know that for?" and no I don't want any change. I would not recommend doing laundry in a public place after seeing that movie either unless you don't use quarters. Every time I put a new one in the dryer I kept thinking, "this coin got here the same way I did..." It's just stupid. This light grip on reality that I have.

Anyway. I Love Super Beautiful meets tonight. We'll see what kind of crap we can come up with using a book on story structure and four bottles of pumpkin ale. 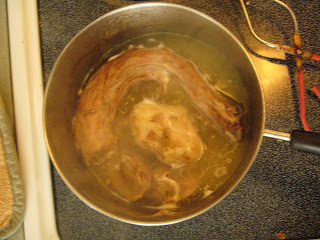 It's around twenty degrees outside. My bones are soaked, chilled, and rattling and worse -my only internet hook-up is this blackberry. This demonic device that reminds me of the job waiting for me when I get back to LA. But i just want to forget that.

It's easy to forget what a house full of siblings sounds like. Or what a town in the thick of deer season looks like. Or what sleet turning to snow feels like. Or what free food from parents fridge tastes like. But it's all coming back to me.

The mechanics in town that gave my sister an oil change and free tire rotation wore carharts and seemed kind of preoccupied. My dad has thrown some safetyblaze orange accessories into his daily running outfit. Don't want em to mistake ya for a buck.

Last night Em and Tdog and I were in royal oak and ran across a half chopped deer hanging by its hind quarters. I got a couple shots of it before one of the hunters came out and asked if we wanted to take pictures of the carcass. Well when you put it that way - who can resist? The dude told us that this was his last deer because he was getting old and it just wasn't the same. I'm not the same guy I was. You change, you get older. He told us while he waived his filet knife around.

I'm just glad mama doesn't have to kill a turkey for tomorrow. We already picked up the pre-plucked bird at Sav-on foods tonight.there has been enough violence around here. Mostly emotional voilence for me though, i can't handle the bittersweet visits with my old pals and old stomping grounds. But like the weather, i really need to dry up.
sprung by S K at 11/21/2007 2 comments: 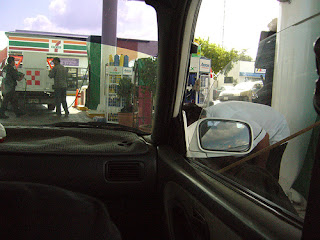 This is my taxi driver leaning over and whispering who knows what to a hardworking woman who was just trying to check his tire pressure.

I would like to be a mexican cab driver and make my own lanes and drive in a spirited manner. I won't be able to for another week or so though because my hand is injured. I cut it on an unknown object hiding in the back seat crevices. That's what I get for trying to find a seat belt. I hadn't even been looking for the thing for thirty seconds when the cab, a well broken in midsized station wagon, got pulled over by the cops.

My driver chuckled. Chuckled and then grabbed a wad of pesos from his shirt pocket and walked behind the car. I had no idea what the f was so funny since all I could think about was me, my problems, my unattended luggage, and my plane boarding. He spoke with the cop for all of twenty seconds and came back before I found the seatbelt but right after I cut my hand.

"A hundred pesos," he tells me, "ticket is about sixty dollars." I was getting used to this pesos/dollars interchangeability so I understood what he was saying - he paid the cop ten bucks to get out of paying sixty - I just didn't want him to tack it onto my bill - I wanted to be consulted for all bribery pay outs.

I probably would have been consulted if my spanish wasn't so bad. The driver was kind enough to hold a conversation with me made entirely up of names of cities and tourist attractions. What else do you really need to talk about anyway when the road is before you always?
sprung by S K at 11/05/2007 No comments:

Eve of all souls cut in line in front of us at the coffee shop.

E forgot her luggage in the hotel lobby. What a goofball. This place has turned into a madhouse because there is some kind of triathlon going on right across the street so the roads, which are normally wacked anyway, are now backed up for miles. So I had to roll out her luggage to a certain meeting point so she could avoid any more unnecessary returnos.

I will get to the good stuff of my trip later when I get home and can supplement with photos but for now I just want to express my disappointment that I couldn't post to my Tumblr blog from my cell phone. Apparently the customer service at Verizon is full of bald faced liars that actively ruin the lives of other people.