Darlings. I'm back in the land of lost sun. And. I have Road Head. And as I just told Miss Amy C, Road Head is not something you give but something you get after a long road trip. The condition worsens if you have to steel your focus on the highway in front of you for hundreds of miles in nervous anticipation of a black ice sighting.

I couldn't remember if I heard the Weather Channel reporter correctly or not this morning. The in-room coffee maker and housekeeping door knocks were so loud -- all I heard was black ice and I-65. Of course, I-65 runs from Mobile, Alabama to Gary, IN, and I was situated right smack dollop in the middle, so the ice could have been anywhere within a eight hundred and eighty mile radius. Very tough on the eyes - especially after dark.

Any hotel, no matter how many of those CB2 vases and throw pillows were included in the redesign, will lose it's travel luster when it becomes a shelter for the displaced. You should have seen the Free Hot Breakfast nook at the Hampton Inn this morning. The ice storm had put people out for several days so there had been plenty of time for a social structure to emerge well before I got there to collect my mini yoplait. Check out the single moms wearing PTA meeting clothes and orange lipstick hoping to run into a potential daddy for one of their little kids who are busy licking hotel chair legs and smashing bananas with a fork into the personal waffle maker. These kids! Climbing all over the lobby sofas, crusting them up with their cereal crud, salvia, and scabs. And oh! The pajamas they put the rugmonsters in, they look like way too much like flimsy floral-patterned long johns. What happened to underoos? At least we tried to look like super heros in my day.

But I was being cross because I slept in and lost some museum time and knew that it was going to take extra long to drive home while avoiding black ice. 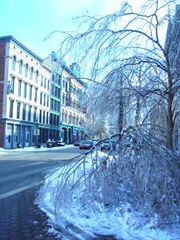 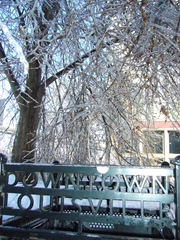 I was outside of The Louisville Slugger Museum & Factory taking even more photos of all the ice (to later annoy friends and family and bog down my flickr account) when I stumbled across a soft grey-haired lady snapping pics of the very same tree. She was tickled pink that I was out taking pictures of the ice because she was doing the same thing and her husband was at a school board meeting conference and the other wives all said it was too cold to go out to the the museums and the ImaX so here she is alone. But she didn't care, wives of school board members be damned, her name is Violet, she put her 2005 AA battery loaded Canon in my hand and walked under the giant bat, turned and smiled and I snapped. Your turn she said. 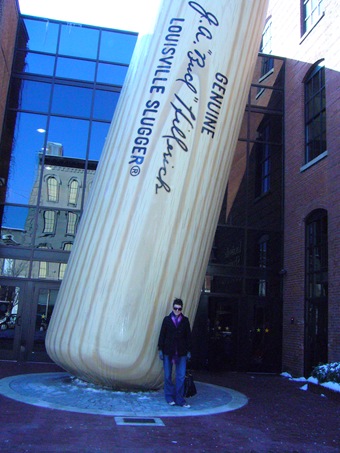 We live bout three hours southeast of here. Are you traveling alone? Yes. Oh my. I like to see everything I can. Me too. What do your parents think? They are very used to it. Do you travel after dark? Not much any more. I can go anywhere as long as it's before dark. My new creed. 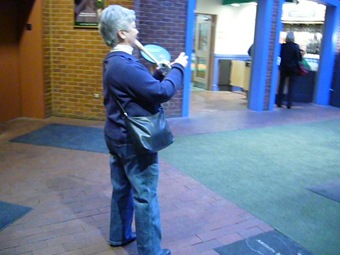 We took the museum and factory tour together, sat next to each other during the short film narrated by James Earl Jones, even turned to each other in amazement when JEJ told us "the pitch last less than one third of a second..." I learned about her daughter and her daughters daughters and the wedding and the trips to Alaska - and I told her about the ice and the Hampton Inn and Memphis - all this as we passed A-Rod's bat back and forth. An excellent forty minute friendship, I do say by the end of the whole thing I was disappointed she just left, saying, it was nice to meet you Sara (albeit in that radical south south KanTucky accent). But I wanted to get our names engraved on a black bat: Violet and Sara, Never After Dark. 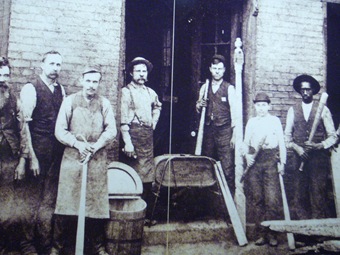