Home from the Rickyard 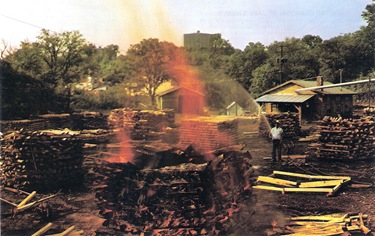 This is how they make the charcoal for the Jack Daniel’s Tennessee Whiskey mellowing process. Do you see the metaphor? A mile-high flame later contributes to a mellow experience.

I’ve been out of town. Before I went out of town I saw the transformer (as in the power supply box thing) blow up like a thousand dollar spree at an Arkansas fireworks outlet and all of the power go out on our block a few minutes before midnight. Seems everyone can’t be running air conditioners full throttle in hundred degree temperatures in 2010 – we should have had a block meeting and formed a cooling station in one our carports. It got crazy nutso hot in here. But that is enough about that – see my alternate blog titled “Hotter than the Hottest Sin” if you want to talk about Memphis heat.

While I was out of town I saw many things but the only thing sticking with me right now in the moments before sleep, aside from the Lynchburg Rickyards, is an overheard conversation between a Cracker Barrel waitress and the uglier half of an old couple. The woman (who did not appear to be of discerning taste - at least about fashion or hair-combing) asked the waitress several times how the baked potatoes were that evening and insisted that she was really, really picky about baked potatoes and could not, in good health, tolerate the sight of a grayed baked potato.

I would not order anything that I was that fearful of myself, but I guess age gives you that kind of courage.