Moist in a Glass Jar 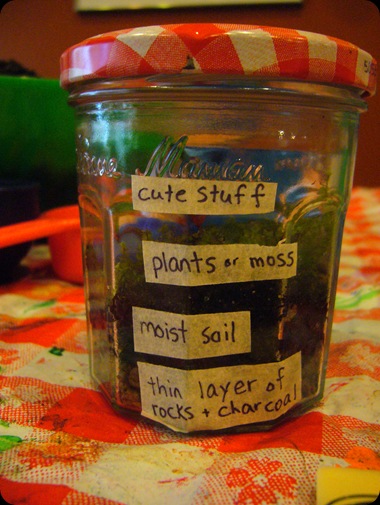 I’m terribly backed up on documenting recent events so I will start with the more recent. First of all, my camera has started to really die – as opposed to just fritzing so it is now in digital camera Hospice. The last night I took pictures with it was at the craft gathering my pal and expert crafter Amie (instructional model featured above made by her) and I put together. And let me tell you it was pretty put together. Amie brought bags and bags and buckets of things to make terrariums with and I brought a purple folder of stuff I had printed out. Teamwork! 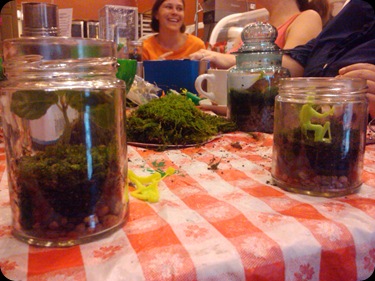 Some people and some teenagers with blackberrys showed up. It was totally fun because there was dirt involved. The containers I used were too small to contain my vision so the next day I was on a quest for larger terrarium -riendly containers. We went to a church rummage sale that we had to leave within a few minutes because the crowd was too intense for B. There were two older ladies pushing around a sleeping crusty-faced gent in a wheelchair and throwing items on top of him. Plus, it was a whatever-you-can-fit-in-a-bag-for-three-bucks type of sale so the mood was aggressive. I just shoved some polyester fabric in a bag along with a pin in the shape in the shape of Texas, paid the people in church aprons three dollars and left for an estate sale in Bartlett.

The estate sale was the home of a man who collected walking sticks and spoons and who was married to a creative woman who painted and sewed. Both obviously loved to travel. 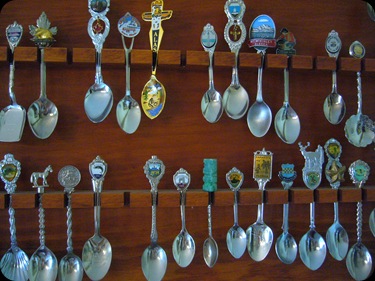 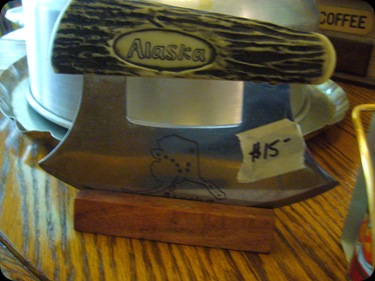 I got a very strong psychic vibe not to buy anything or take any pictures of the artwork, but I found this one perfect lidded glass container shaped kind of like a giant apple.  Against my powerful psychic premonitions, I bought it for four dollars and wouldn’t you know it - thirty minutes later upon arriving home, “accidently” broke it while carrying it up the stairs. I am now probably cursed by the angry craft spirits. Dead peoples homes!

It’s not always bad however, a few weekends ago, my pal Kimberly got hitched on the lawn of some fabulous dead people  – entry to follow about that later. It’s really more about rummaging through dead people’s belongings as they left them (who knows if these people were dead – they could have just bailed on their mortgage I guess) that gives me the jeeebies.

By the way – I am totally fine, if not obsessed, with cemeteries. So much like the people featured on hoarders, I believe in the imaginary emotions of objects.

I loved this post. I so want to make these and the army men are such a nice touch. Also, love the church sale vs. estate sale writing. OH, and that spoon photo is fantastic. Next week's Eye Thunder theme: Dead People Collections or just Collection?